I’ve lived in Houston since 1997. It’s flat. You don’t realize how flat until you’ve traveled to Austin or San Antonio. The Texas Hill Country quickly reminds you that Houston’s only hills are its highways and beltways. It’s also full of traffic, and as recently shown on the news, prone to flood. We have bayous and creeks surrounding our flat terrain. Still I love this city for so many reasons such as :

1. Diversity. This is truly an international city. Global companies choose Houston to place as their U.S. headquarters consistently. We attract business and opportunity bringing people from all over looking for work. Annual Greek and Italian festivals along with the city’s international festival, highlight just some of those cultural activities that the city and its suburbs love to celebrate.

2. The people. Because there’s such a diverse group of people in the 4th largest city of America, people learn to interact with others from such different backgrounds and we do it daily. That’s why people came together so quickly to help during Hurricane Harvey. Houstonians help when the cry for help is sent out. They may have cursed at you the day before for not merging onto the freeway correctly, but the next day that person is there to help you evacuate your flooded home.

3. Food. We have the best. Fajitas and margaritas are a staple. Bar-B-Q and chili cook offs are as frequent as weather updates. Spanish tapas bars, hip Montrose eateries, elegant Galleria restaurants, taco trucks, China town, and seafood dives where you can “peel n eat” crawfish and shrimp, dot our city’s landscape.

4. Sports and entertainment venues. We have the

Rockets, Astros, Texans, and Dynamo. We still have loyal Oilers fans. Our fans have been deprived of a championship for a long time, but they remain true and steadfast. Houston also attracts the best performances from opera, to country, rock, jazz and we have a symphony that gives free performances to the public in Herman Park.

5. Resiliency. People here pick up the debris and tattered left overs from the storm and get to work. Neighbors help neighbors and volunteers show up in full force to aid in cleaning homes, schools, and businesses affected by the flood.

It’s going to take time for Houston to rebuild. We have flooded before. It will most likley flood again…but hopefully not for a while. We’re Houston Strong and will take life one day at a time. Congratulations Houston! You showed America and the world what we’re made of. Now time for a margarita.

In Pamplona, Spain today the Festival of San Fermin, also known as the Running of the Bulls, had its first day of what else…running!  For the next several days people will allow themselves to run along side massive animals with the possibility of being trampled or gorged to death.  Ernest Hemingway’s novel, “The Sun Also Rises”, brought even more notoriety to the event, and people continue to flock annually to Pamplona from around the globe.

Watching the live coverage today reminded me of a trip my mother and I made to Spain several years ago.  The Spanish lifestyle was something we had to get accustomed to you on our ten day voyage.  By day eight we were still trying to figure out exactly what time Spaniards ate dinner and when they went to sleep.

Here in the States our routines are more regimented.  Most people work from 8 to 5 with a one hour lunch.  Typically an American worker has two to three weeks of vacation.  There is a rush hour in most major cities in the morning and evening, and people work this routine Monday through Friday, week after week, months on end.

In Spain, however, work is treated in a more carefree, spirited fashion.  Businesses open later in the morning, they close for a couple of hours in the afternoon, and then reopen in the evening before closing much later than our accustomed 5:00 p.m. closing time. The Spanish don’t seem to let time control them but rather the other way around.  They enjoy their time with family and friends with late, evening dinners and frequent tapas bars.

In a tapas bar you let the waiter know what items should be brought to the table, or bar if you prefer to stand, along with a bottle of wine or sangria. Everyone shares the food and drink and pays little attention to the time.  The Spanish simply enjoy life.  They have a passion for food, wine, and people.  The laid back atmosphere on that trip inspired me to do the following: find a great tapas restaurant in Houston (Mi Luna is a great one – see milunahouston.com), learn to make sangria, and slow down to enjoy life.

I would love to go back to Spain someday but not to run with the bulls; instead run with a passion for living and back for another glass of that 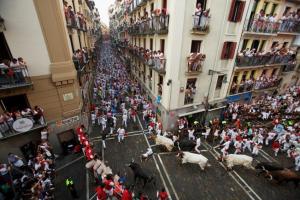